"You can feel the seas coming up through the boat through your feet" Tiggie Peluso, Cape Cod fisherman

When I first found myself washed up on the shore of Cape Cod I didn't know the difference between the Chatham Bars, the Peaked Hill Bars and the Main St. Bar. But if you're the least bit curious about this arm shaped pieced of land that stretches its upraised fist at the ocean at the same time that it holds the history of our country in it, over time, even if you're not a fisherman, you learn. And what you learn, what I have been learning, is astounding, at times horrifying, and humbling.

I admit that I've been fascinated, maybe even infatuated, for many years by people who befriend oceans and skies and unknown territories - surfers, sailors, the early aviators and explorers. People who leave the safety of homelands, or just their couches and set out in what look to me like dubious forms of transportation, or just on foot, in search of freedom. In college on the west coast, two of my best friends were crazy surfers, one of them a Hawaiian who knew about big waves. We would regularly drive for forty-five minutes on a cloudy day, just so they could catch one wave. I learned to appreciate the intensity of the way they looked at the water, the patience, the intimacy, the courage and fortitude. I began to understand the poetry of it. They weren't just party animals, smoking the weed and looking for the wild thing, there was something palpable in what they were doing, something big, something I loved.

I grew up around the ocean and have lived most of my whole life just about within sight of either the Pacific or the Atlantic. When I was a toddler, fearless and ignorant of danger, my parents have told me that they were afraid to blink because I loved the water so much that I was always in it, around it, or under it. I don't know exactly how old I was, but I remember the first time a wave took me under and wouldn't let go. I was shocked, outraged, terrified that my friend the ocean, who I played tag with for hours sometimes, was now threatening my life. Even then I understood as I struggled to come up to that glittering, light filled surface, that I was utterly overpowered by this unknown entity. It was on that day that I learned respect for it.

My love affair with all things water has continued, but I never take it for granted now, and I rarely turn my back on a wave. I have learned that they tend to comes in sets, of three, just like trouble, and that the biggest one is usually the last.

This past fall I lost a dear friend to the ocean. It has finally broken my heart, just like it's broken the hearts of women and men for as long as we've inhabited the planet, probably. Just like kids every where are born knowing the game of peek-a-boo, and hide and seek, through out time people everywhere who have lived near the sea know the tragic story of loss. Like that first tangle with the ocean as a child that gave me knowledge, my friend's drowning at night in a stormy winter sea, with forty-five foot waves and the subsequent stranding of his daughter and best friend for twelve days out there, has given me a much more personal relationship to all the stories of the whalers, the early settlers and today's fishermen and women, that I have been so fascinated by since I took up residence here thirteen years ago.

I am what's known as a "wash-a-shore" here on Cape Cod and I always will be, because I wasn't born here. It's meant to be a slightly derogatory term, but better to be a wash-a-shore than a washed-to-sea, I guess. Even on lonely, wintery nights like this one, when I'm not totally sure, I think of my friend's daughter Amanda and how having witnessed her beloved father's tragic death at sea she is clinging emphatically to life. She is a reminder to me of "this one precious life". I pick up my pen and try to make it count somehow, the best I can.
Posted by Debra Babcock at 9:39 PM No comments:

It’s February, grey, cold and windy here at Herring Cove Beach in P-town today. Not as cold as it’s been though, in fact, rain is expected, after so many weeks of snow that in this week alone, over one hundred roofs have collapsed across the state of Massachusetts due to heavy accumulations of snow on flat rooftops. The television news has, of course, been all over that, the drama, they love it. The parking lot here, usually coated with cars even in winter, people inside gazing out, trancelike, is empty today, covered instead, with ice. There are only two cars here now, at two in the afternoon on a Saturday, my Subaru, and a big green Tacoma pick-up. Then there’s something else, a man peddling a three-wheeled vehicle of some sort, very low to the ground, his legs sticking straight out in front of him, as he peddles and slides over the lumpy ice. He has a small red flag extending up from the rear of his vehicle, flapping wildly in the wind, while two flashing red lights blink back and forth, like those lights on kids sneakers, directly behind the two sides of his butt, lest you miss him underneath, and drive right over him, I guess. He wears a helmet and has two carrying sacks on either side of the flashing red lights that appear to be full. Of what, I wonder. Food? Collected rocks? You could just reach over and pick rocks and shells right out of the sand from that thing if you were so inclined. Water? Cigarettes? No, clearly he’s an athlete of some kind, it’s freaking cold out here, and the ocean, though not at high tide, or at peak wildness at the moment, still could not be described as calm, the wind is picking up plenty of whitecaps out there. No, he’s not out for the fun of it, a little light exercise, he’s on a mission of some sort. But is he handicapped, training for something, recuperating from an injury? One thing is sure, he is intrepid, by my standards.

In contrast, I am still in my car, but I have come out to this end of the Cape, as I often do in winter, because it reminds me both that I am actually, viscerally, alive, and also of why it is that I say that I love living on Cape Cod. Because sometimes, I forget. Sometimes it feels like such a small and insular world here that I can hardly believe that this is actually where I hang my hat. But when I come out to any one of the spectacular landscapes like the one directly in front of me, that abound here on Cape Cod and walk, or just look, or even, sometimes, just close my eyes and listen, I remember. I don’t just remember why I love this place, I remember that I love living and breathing and seeing and listening. I am Home again, and grateful. Last week it was a long walk out through the snow and ice-covered wetlands with my husband to a bench at the edge of Cape Cod Bay at the Wellfleet Audubon Preserve. Other times, like today, I just go alone and find some spot to look out at, maybe close my eyes for a bit and listen to the wind.

Alone, of course, is a relative statement, even out here at this time of year. Though there are few other humans here today, there are a hundred or so seagulls, outside my car, all lined up and facing in the same direction, like bowling pins, looking, like me, out to sea. What are they looking at I wonder? Are they watching the waves considering when it will be the right time to re-enter? Are they all watching that one big seagull out in front, waiting for him, or her, despite having grown up and lived most of my life around the ocean, I still haven’t learned to tell the male gulls from the females, to make the first move? With all of them sitting around here like spectators waiting for a sporting event, I only see one of them out there actually in the water, on the waves. What’s different about that one? Why is he out there alone? Brave? Stupid?? Ostriacized? Anthropomorphosizing, that’s what the man behind the counter in the liquor store said is the word for imagining that animals are thinking human thoughts. You know, it’s Provincetown, everyone fancy’s themself a performer, a writer, an artist, or wants to be, except the fishermen, the few that are left, which is a story, or many, for another day.

Today there’s not a single soul is out here actually walking on the beach either. We did get to see the sun for a few brief hours at the start of the day, but now, just after midday, it’s disappeared and an icy rain is beginning, hitting the windshield with an angry sound as if each drop was a tiny frozen spitball, intentionally thrown just to be annoying. What’s the word for giving human thoughts and actions to nature? Naturomorphosizing? But I thought it was nature that gave us the capacity to have thoughts to begin with. Well that’s just an endless spiral now isn’t it? I think I’ll just close my eyes and listen to the rain.
Posted by Debra Babcock at 6:54 PM No comments: 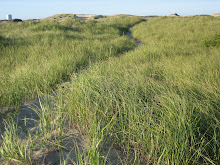